The Cantiere delle Marche history starts in 2010 with a group of people united by the passion for the sea: woman and man able to deal with daily challenges in a constantly evolving industry. Cantiere delle Marche is an influential reality which was able to earn a spot in the world yachting market, where it is firmly positioned among the top twenty shipyards in the world.

First shipyard in the world
for segment of
yacht explorer

Cantiere delle Marche is confirmed for the fourth consecutive year, the first shipyard in the world in the construction of yacht explorer.

Cantiere delle Marche market share in the segment of steel and aluminium yachts from 80 to 110 feet is constantly growing.

The production area of the shipyard has more than 8000 m2 of space available for the 6 production lines.

All the communication activities realized are related to three main assets: personal experience, the sailing world, product values. Added to these was a fourth asset, the exploration, a narrative element that associates Cantiere delle Marche to the imaginary and the "explorer yachting" segment. 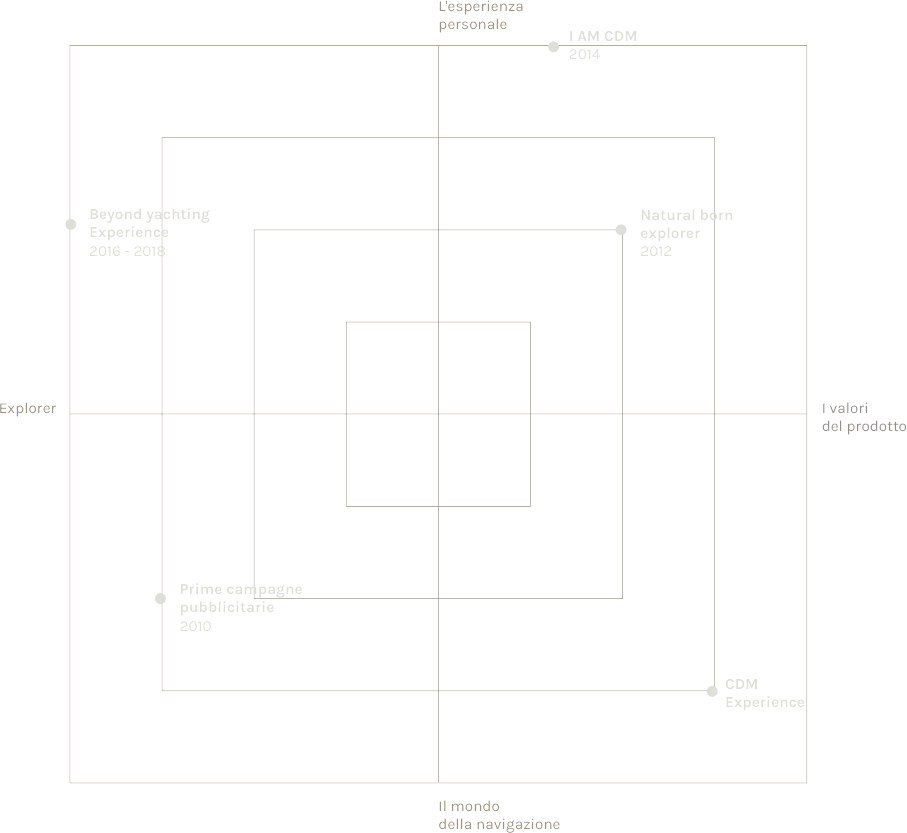 The restyling of the brand works in subtraction, which is expressed through a clean form and a simplification of design. 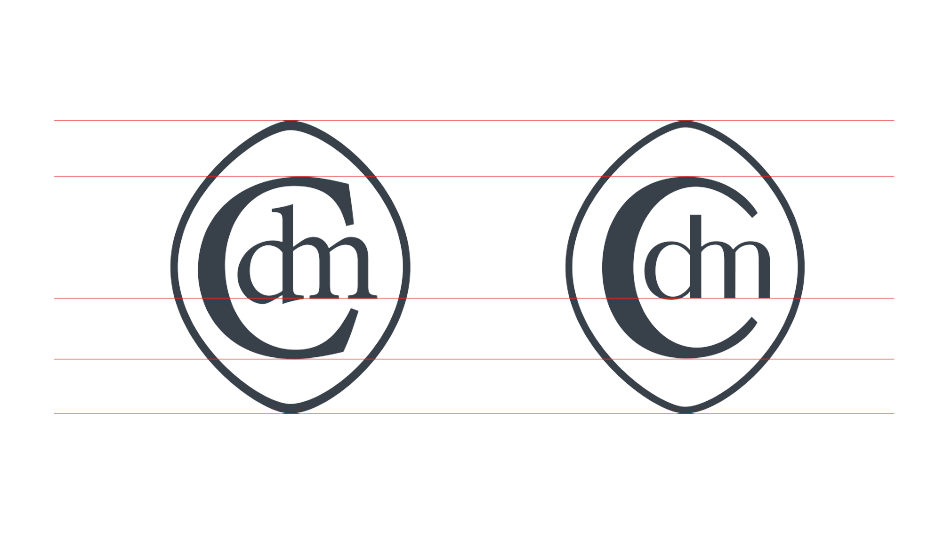 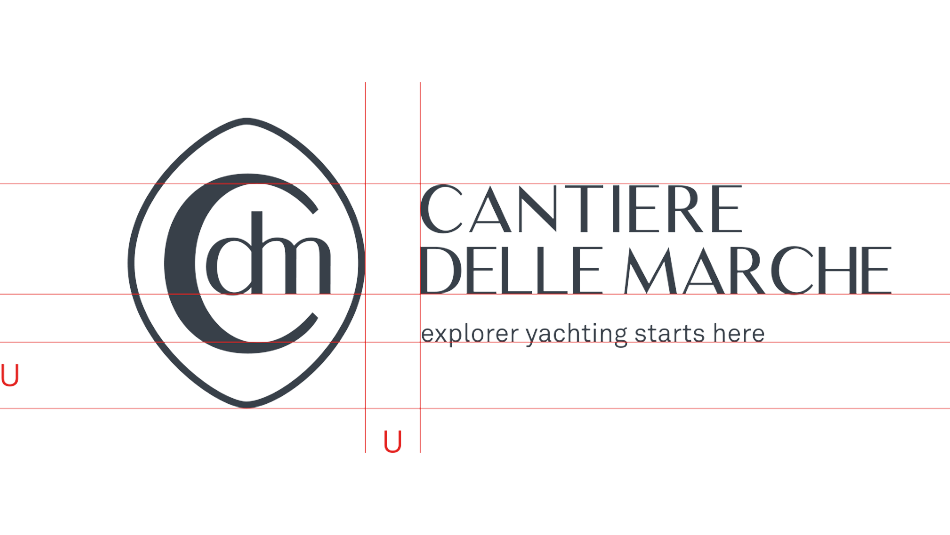 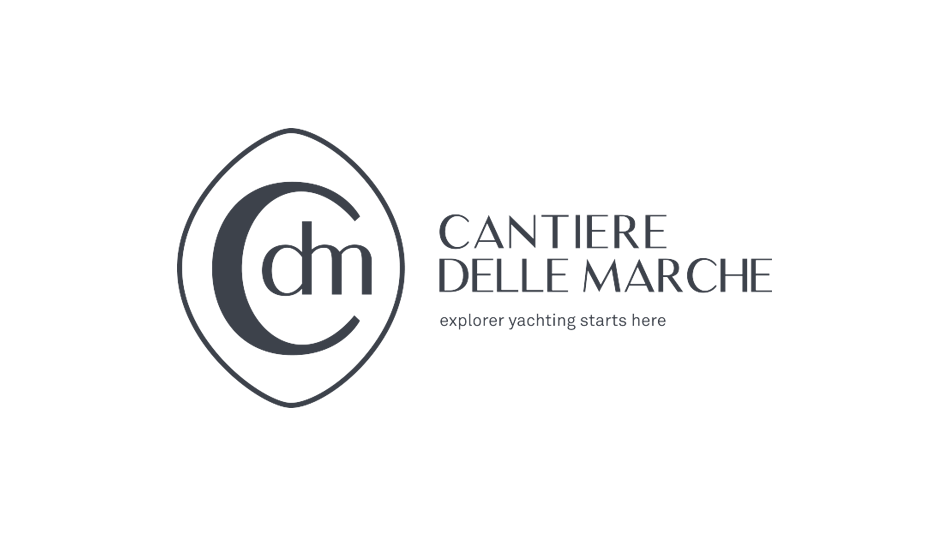 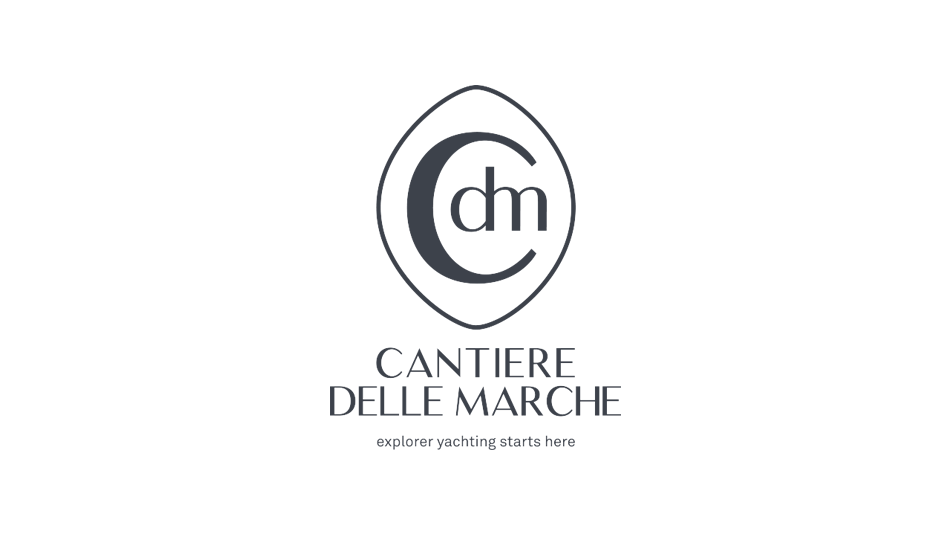 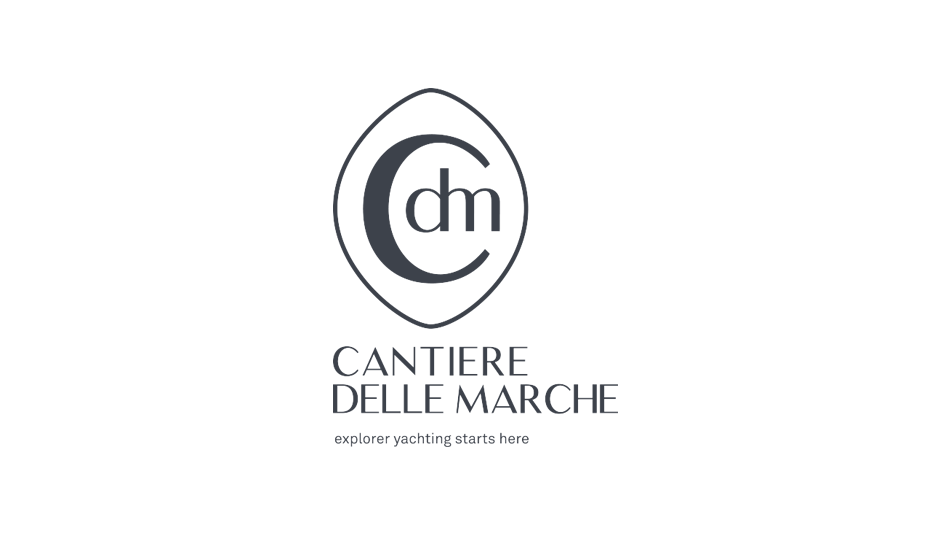 “Explorer yachting starts here” is the new shipyard payoff. To highlight the positioning was decided to work on a fundamental concept: since 2015 Cantiere delle Marche is world leader in the construction of yacht explorer and for worldwide

The payoff declination anticipated by the incipit “we start”, become the new rhythm of the communicative register which allows to create a coherent structure to convey all the value content of CdM. The beginning of the explorer yachting journey is possible only from the people, from the design, from the navigation and from the selection of the materials that constitute the assets of the entire system of communication. 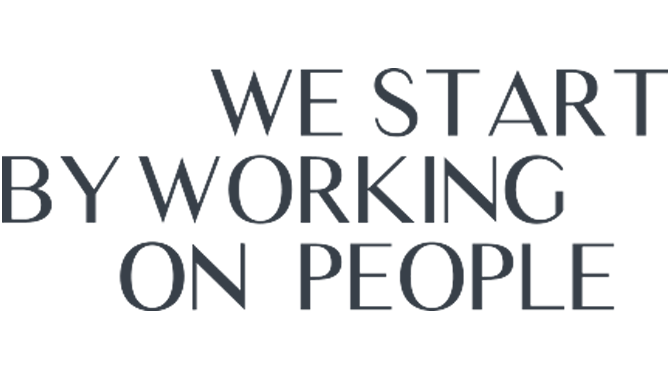 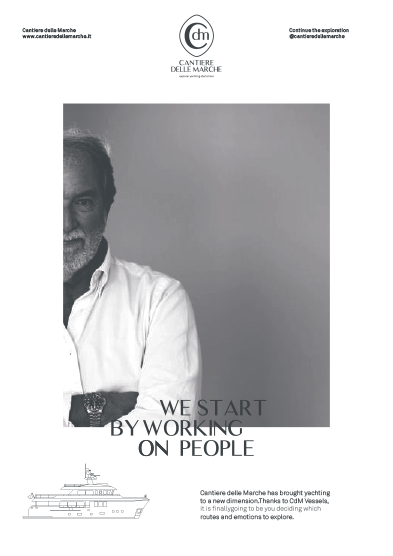 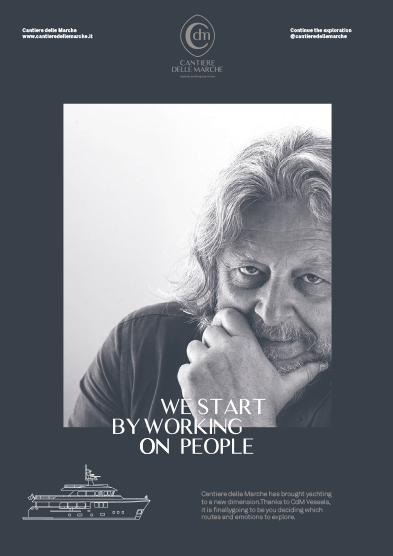 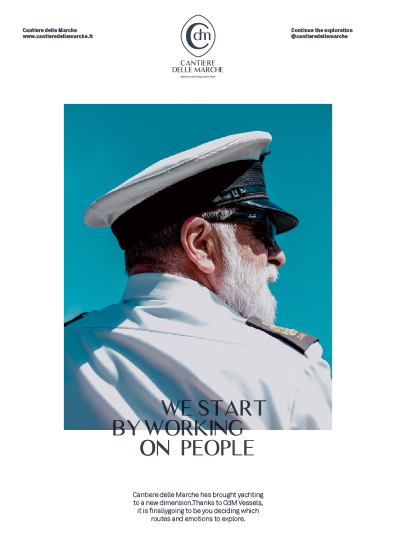 The communication rhythm arises from the assumption of travel and pays more attention to the value assets which characterize the positioning of the yard. The declination of the payoff allows the development of all the communication focuses leveraging online and offline tools such as ADV, Social Network and Website. 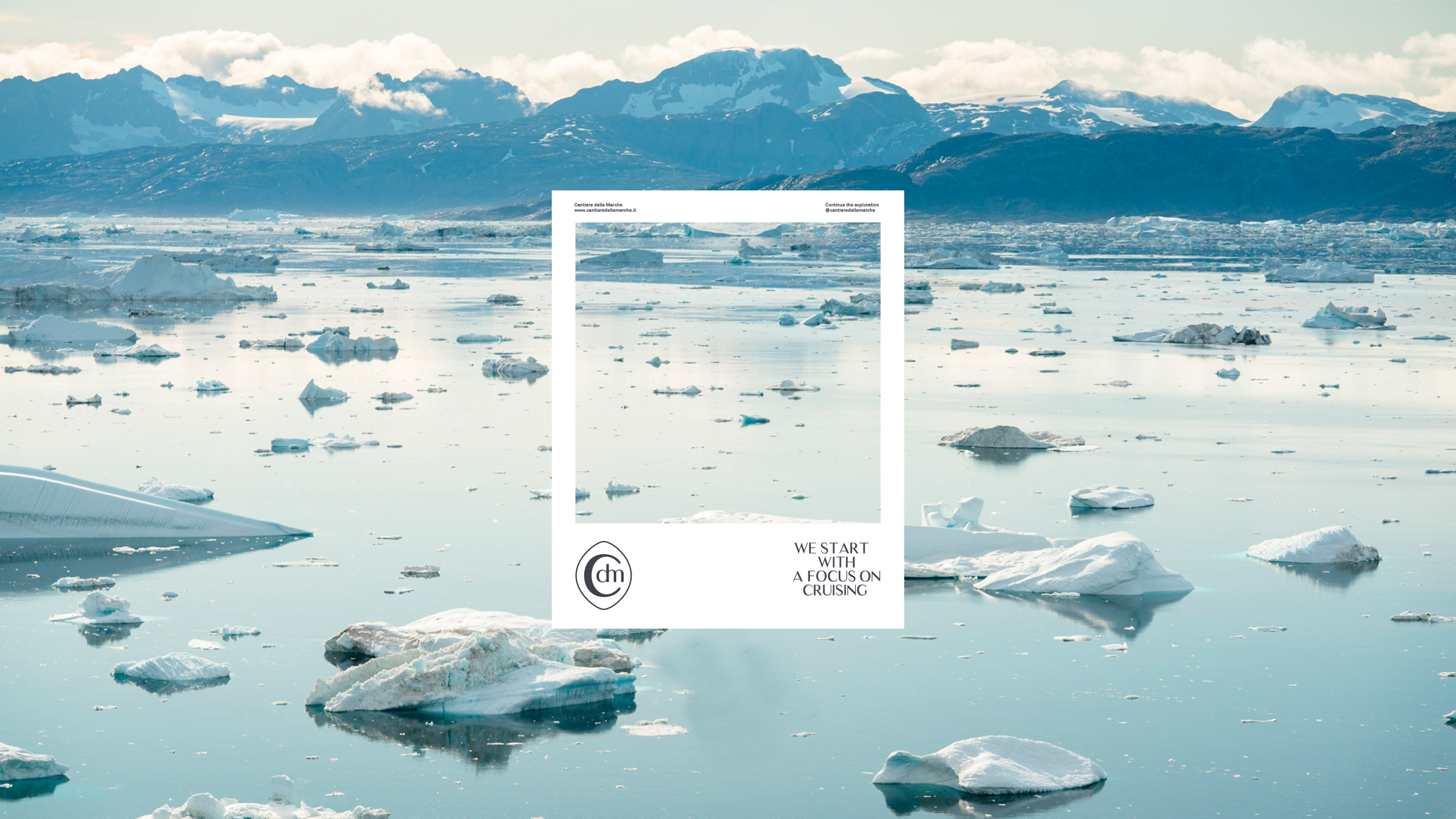 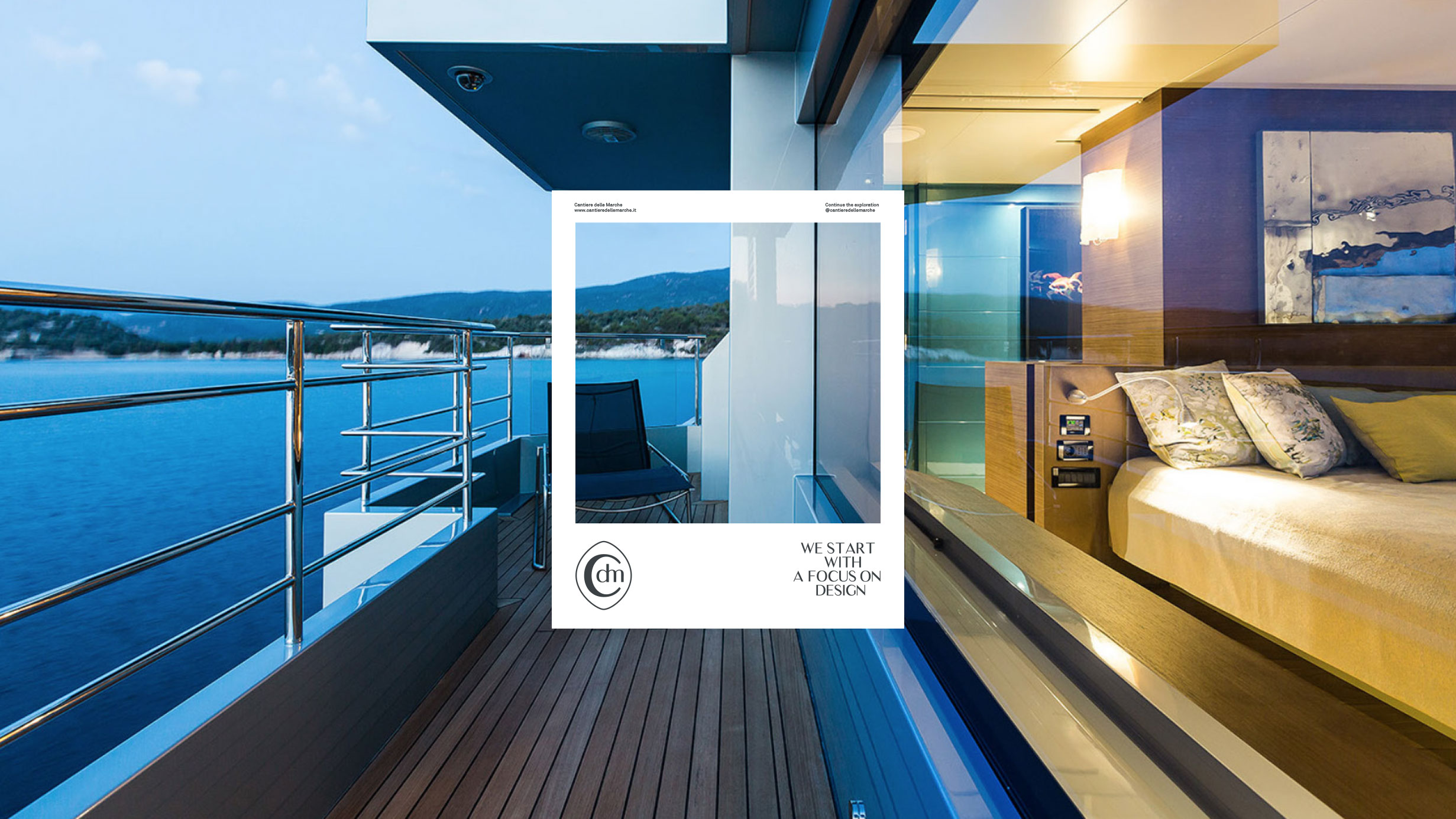 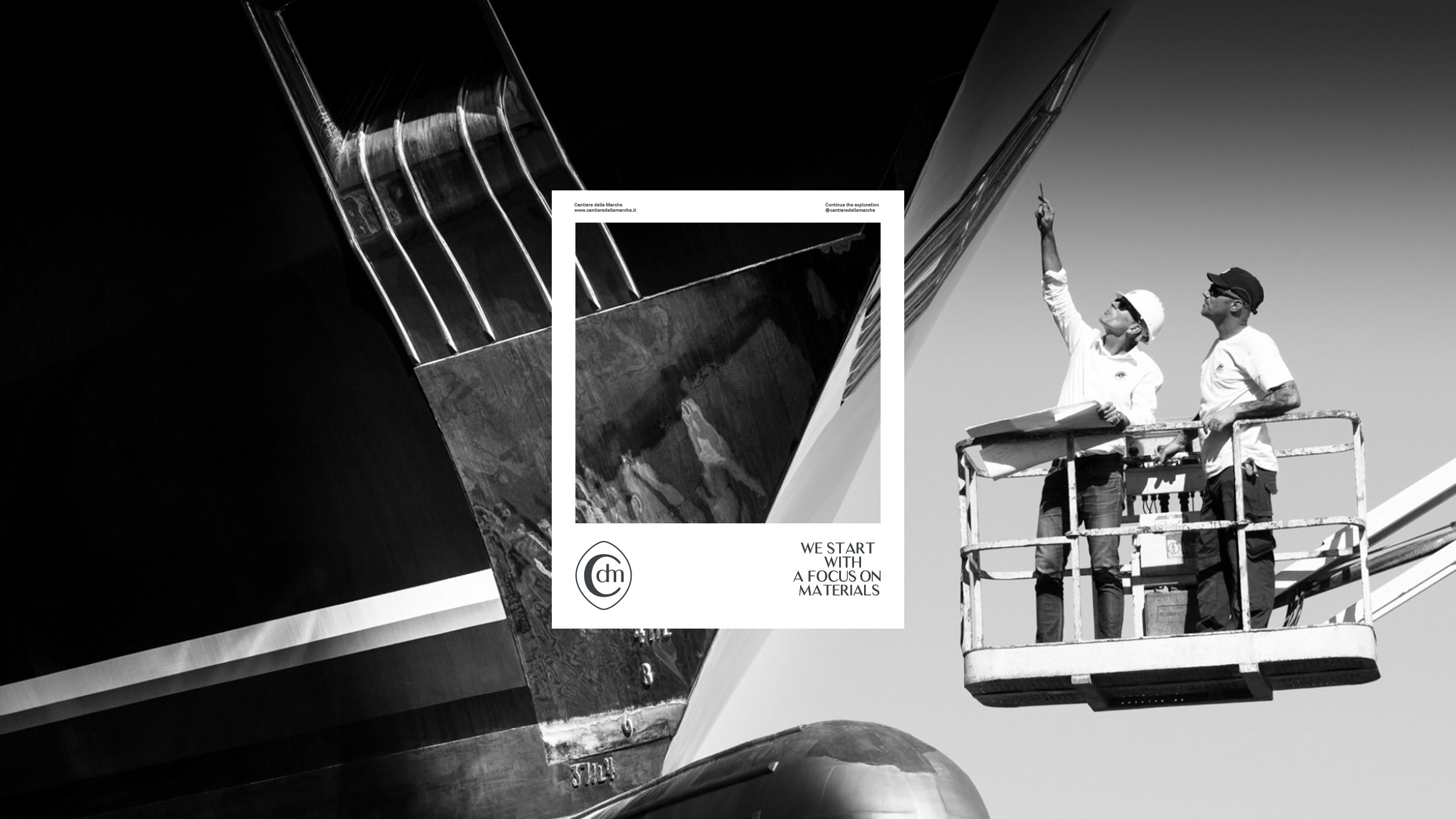 The payoff is the incipit of the communication system. The ADV claim, modified by the payoff, starts from the concept of “expedition” and becomes “The expedition starts here”, always followed by routes and geographical indications supported by pictures taken by ambassadors who have sailed the world on the explorers built by the Cantiere delle Marche. 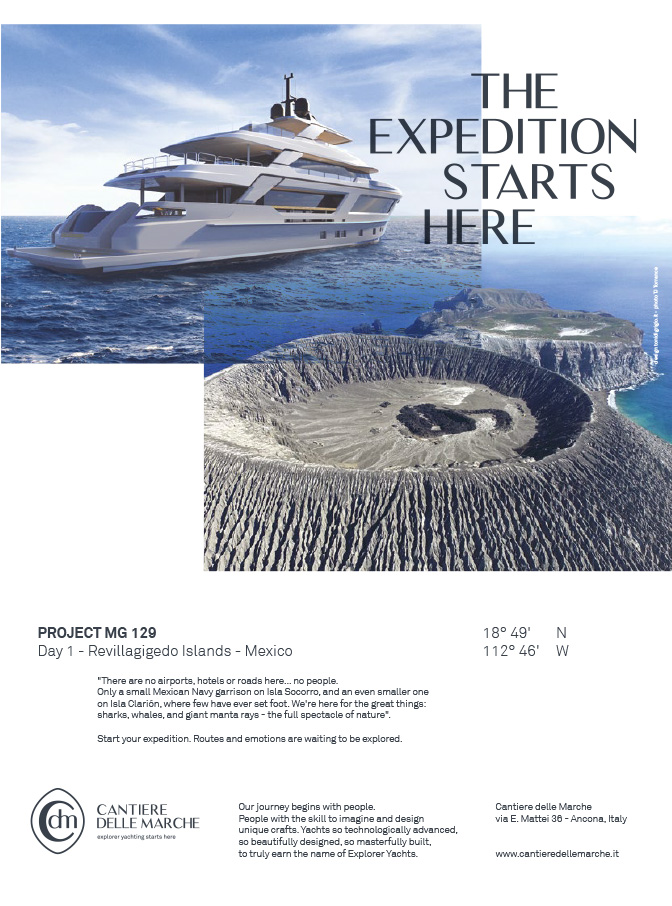 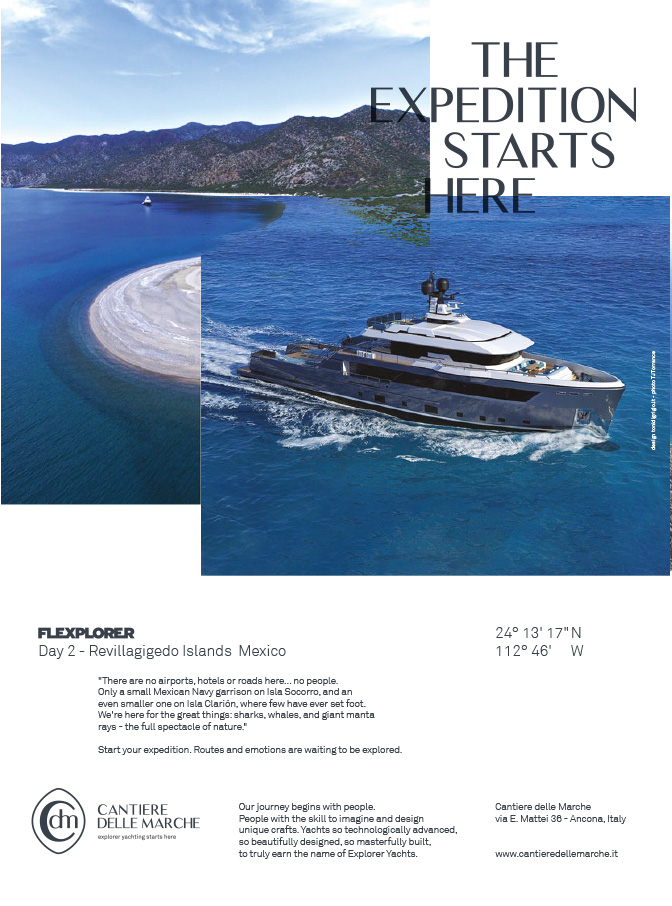 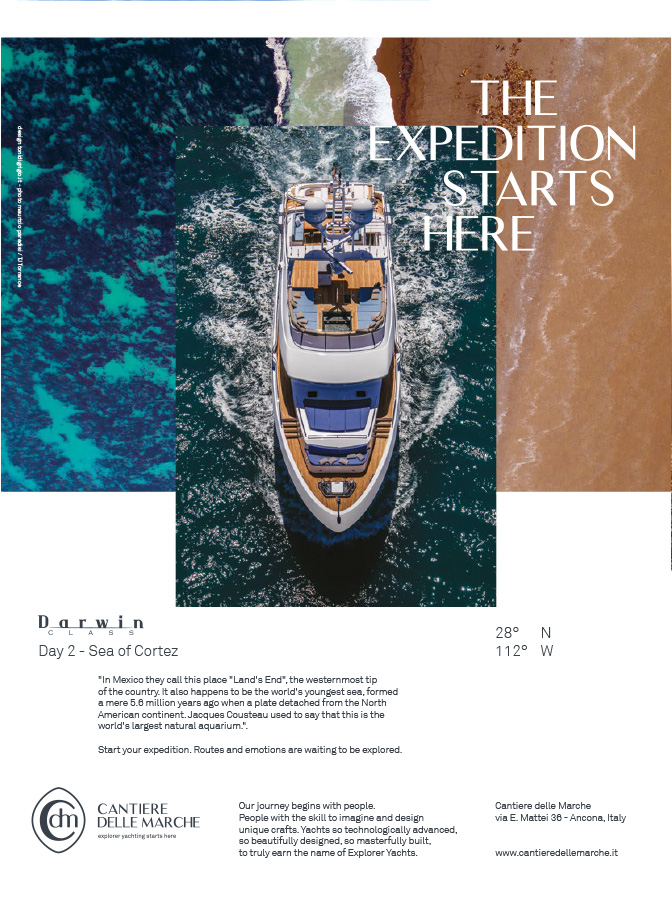 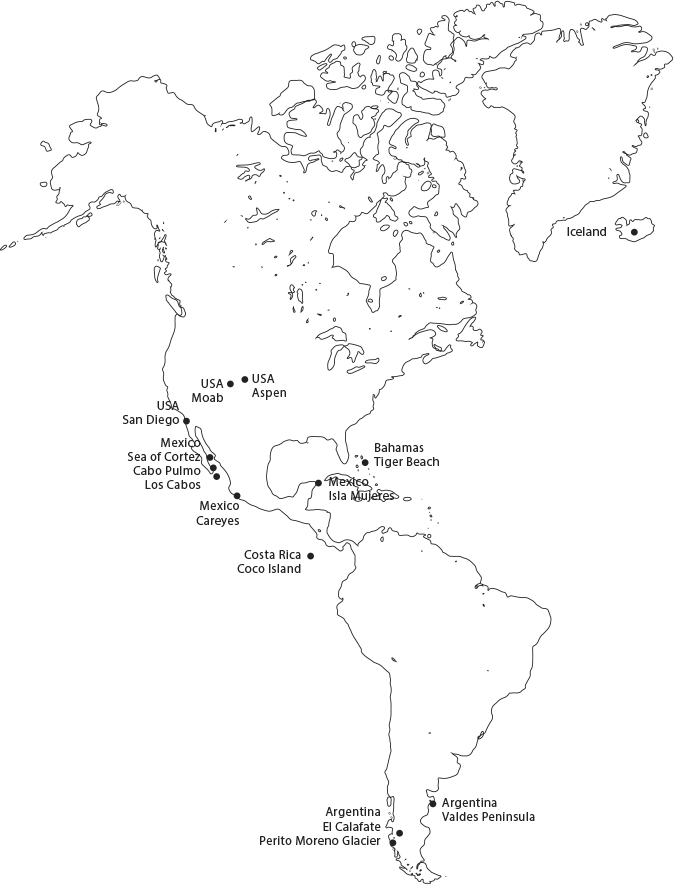 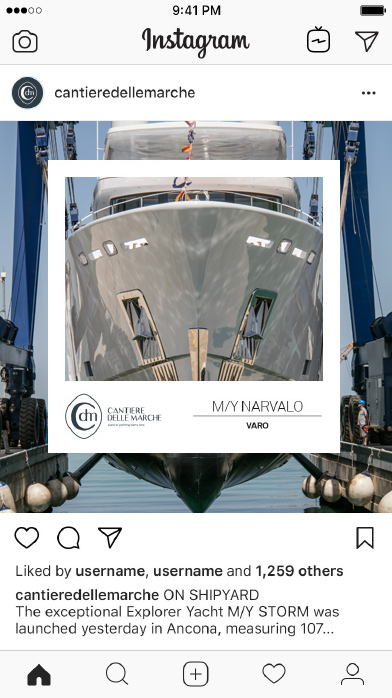 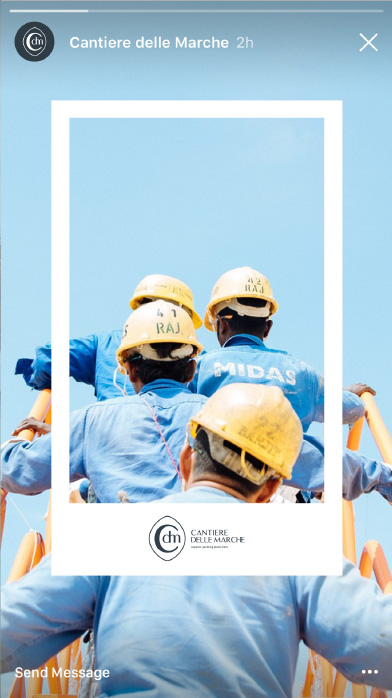 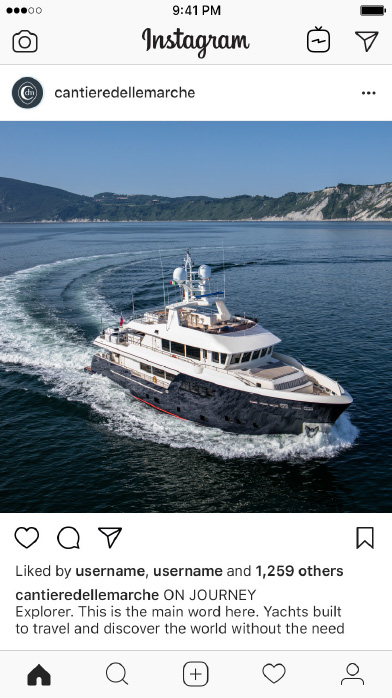 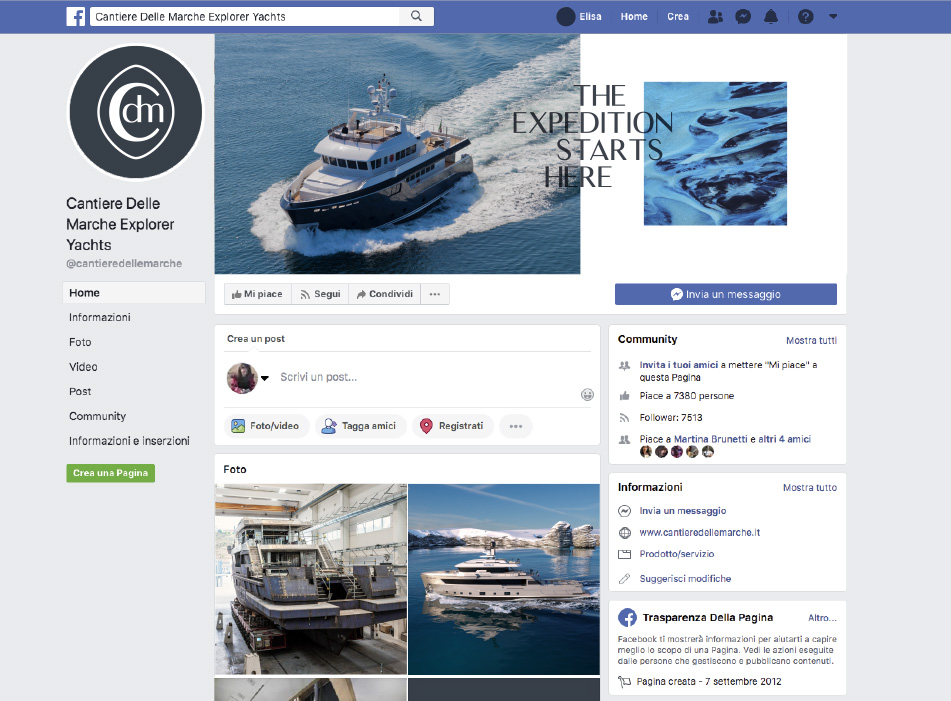 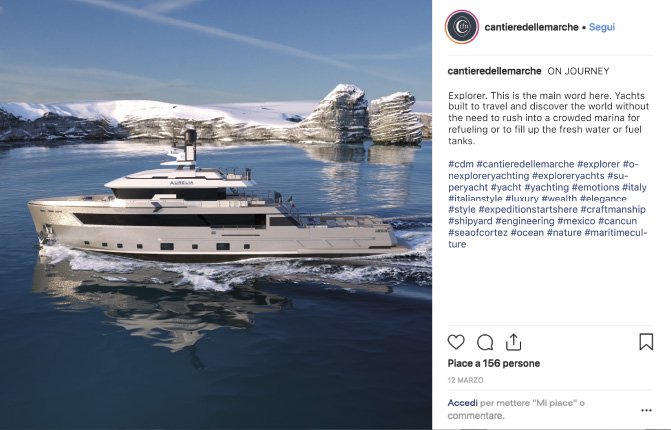 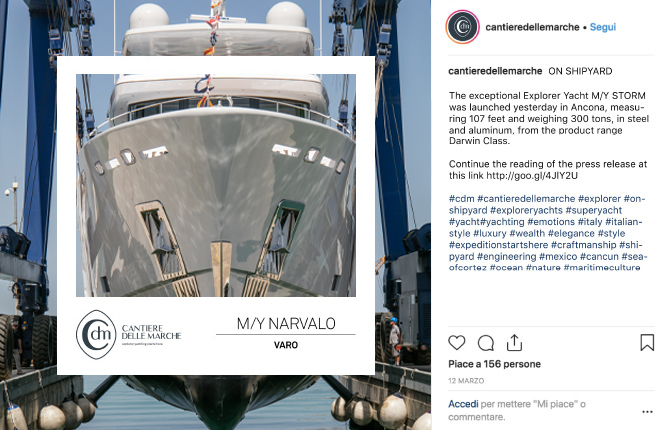 The chromatic palette and the reference typography have been enlarged and updated. It is composed of two linear typographical characters only differing in the contrast between the vertical and horizontal rods in the design of the letters. These new elements have then been used to design the entire new institutional coordination of the Cantiere delle Marche. 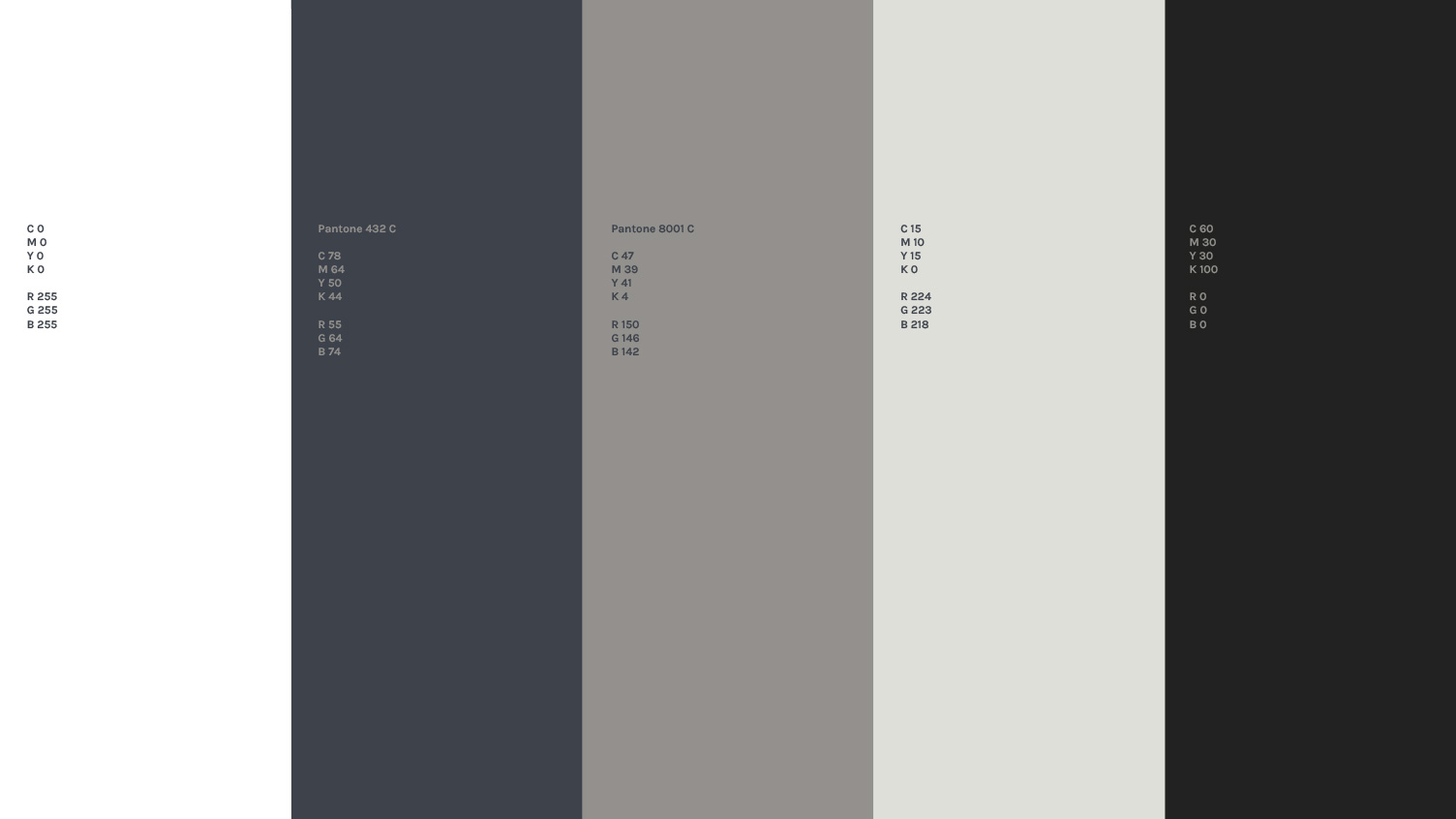 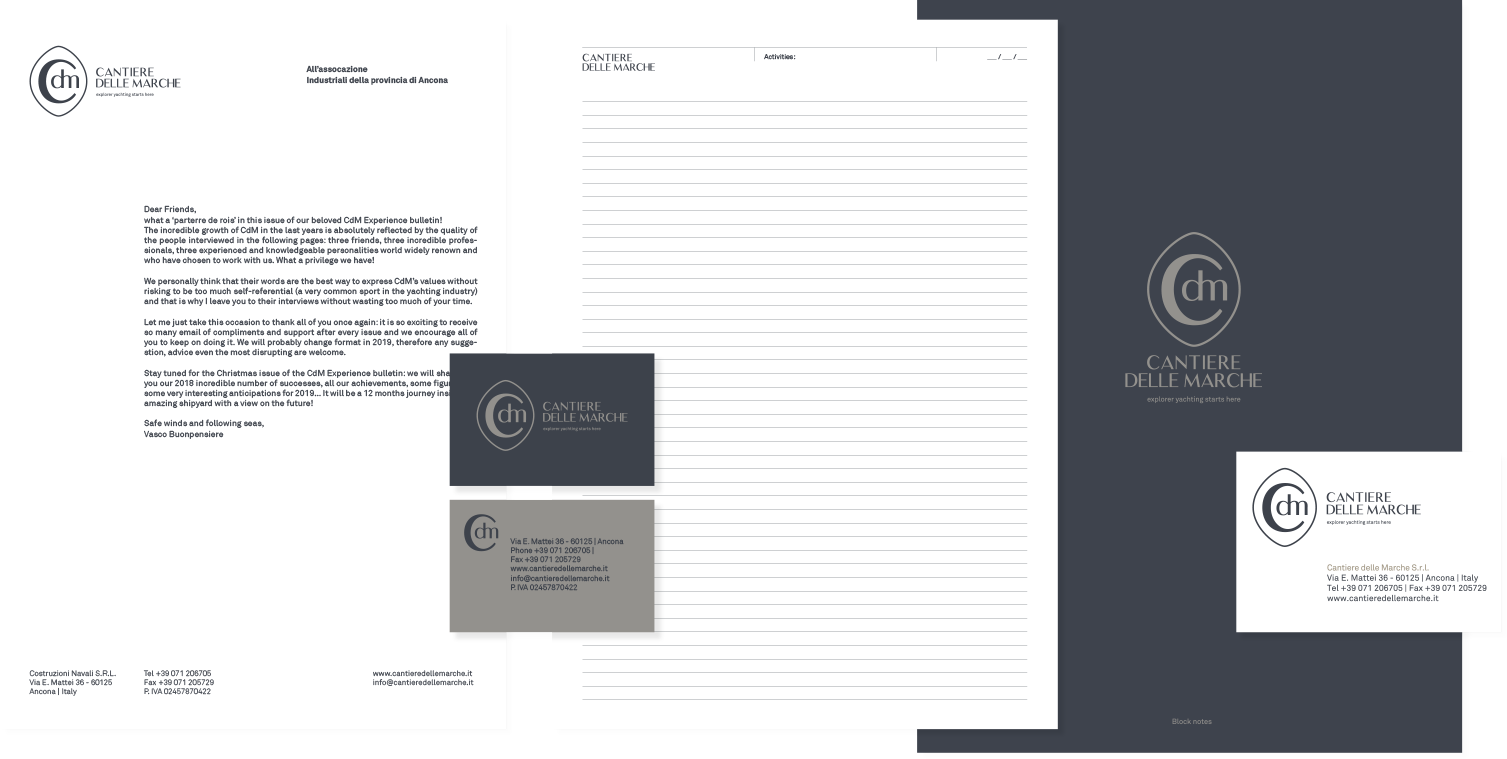